A United Airlines flight traveling from Hawaii was forced to return to Honolulu when a fire broke out in the engine. Flight UA132 was heading for Majuro, the capital of the Marshall Islands, on Sunday when flames started shooting out of the engine. The flight landed safely back at Daniel K. Inouye International Airport; no injuries were reported.

There are some things you hope never happen to you on a plane. Hostage situations, severe turbulence, snakes… but something which has to be super scary for any passenger is to look out of the window and see flames shooting out of the engine.

That’s exactly what happened to passengers on a United Airlines flight last Sunday, leaving many stranded in Hawaii for almost a week.

The United Airlines flight from Honolulu to Majuro, Marshall Islands, took off at 07:37 local time on Sunday 26th May. 141 passengers and eight crew were reported to be on board the Boeing 737-800, registration N37281.

The aircraft took off as normal, but moments into the flight as the aircraft headed out over the water, something went wrong. Passengers report seeing flames shooting out of the left hand engine, in two bursts.

According to flight data, the aircraft then circled over the ocean for some time. Presumably the flight crew were performing tests on the engine to decide whether to abort the trip. Clearly the eventually decided that it could not go ahead. The aircraft landed back at Honolulu almost exactly two hours later, at 09:35.

The flight was met by emergency crews. However, no injuries were reported. Khon 2 reports that an airline spokesperson said the flight experienced a ‘mechanical issue’ with one of the engines. Detail of the nature of the incident was not reported.

Information on Flight Radar shows the flight cancelled, in addition to the three next hops which would have been using the same aircraft. At this time, the same trip programmed for June 2nd is still on the schedule, although it’s not clear whether the same 737 (N37281) will be used.

Passenger Josh Ley was filming their flight when the incident occurred. He was reported by the IBTimes explaining what happened:

“Had fire and smoke coming out the back for like a few seconds, like two spurs of fire,” Ley said. “Then next thing you know we were staying at the same elevation, circling around for almost an hour before we landed again. It was about an hour of just trying to figure out what’s going on.”

He went on to say that the pilot told passengers that a compressor on one of the engines had failed. Ley continued:

“They checked out the plane to make sure that we were safe to arrive at the gate. They had to cool down the [brakes]. They gave us the go-ahead to come back to the gate. We waited at the gate for a little while. Finally, we got the notice that our flight was canceled.”

Some passengers were booked onto the next flight out, which left at 09:37 on Monday. However, as there was not room for all of them, a number were told they would need to wait until Friday for a connection to Majuro. Ley has told reporters that they’ve been provided with hotel accommodation and food vouchers until the flight leaves.

It’s not the first time that a 737 has been reported to have suffered an engine fire. A Utair flight just last month was videoed with flames spewing from the engine. Despite the reassurances of crew members that all was well, and it was ‘normal’, passengers begged to differ, with three even trying to exit the plane via the wing emergency exit.

Have you ever seen flames coming from a plane engine? Let us know in the comments! 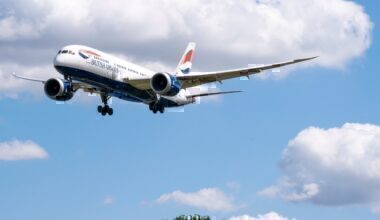 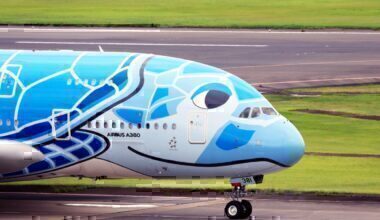