The Vickers Vanguard Flew For The Last Time 25 Years Ago

On October 17th, 1996, the Vickers Vanguard performed its final flight. Only 44 units of the British short and medium-haul turboprop were built before it retired a quarter of a century ago.

The Vickers Vanguard was larger and had greater capacity than its predecessor, the Vickers Viscount. However, the Vanguard wasn’t nearly as popular, with the Viscount program producing 401 more units.

Nonetheless, the Vanguard found its own path. It entered as a passenger solution with British European Airways (BEA) on January 20th, 1960, but during this period, passenger jets had taken over the scene. So, the type found it hard to keep up with the rapidly-changing requirements of the market. As a result, the Vanguard adapted to become a trusted cargo aircraft.

Manufactured in Brooklands, Surrey, 23 Vanguard units were sold to BEA, while 23 were taken on by Trans-Canada Airlines (TCA). TCA modified one of its Vanguards to a cargo configuration, giving birth to the Cargoliner. Many of the Vanguards in service were also converted to freighters during this period.

Other carriers, such as Invicta Airlines, Air Bridge Carrier, Europe Air Services, Merpati Nusantara, and Air Trader, started to take on units over the years. Notably, BEA Freight flew the modified ‘Merchantman’ all-cargo layout from the end of the 1960s. Hunting Cargo Airlines Ltd (formerly Air Bridge Carriers) was still operating this model in the 1990s.

The final flight was performed by registration G-APEP. This unit first flew from Brooklands on November 29th, 1961. It was aptly returned there for its final touchdown and went on to be stored and displayed at Brooklands Museum.

“After nine years carrying passengers, ‘EP was converted into a Merchantman by BEA in 1969-70. It re-entered service on 23/2/70 and joined the new British Airways Cargo division on 1/4/74. On 8/11/79, ‘EP was sold to Air Bridge Carriers and stored at East Midlands Airport until entering service in 1981,” Brooklands Museum shares.

“With stalls fitted inside temporarily in 1991, ‘EP carried up to 18 racehorses but, in early 1995, it became the world’s last airworthy Merchantman. Retired on 30/9/96, its last flight came when donated to Brooklands Museum by Hunting PLC and landed here on 17/10/96, with help from British Airways, the CAA, National Rescue and Trafalgar House Property. In June 2004, ‘EP was carefully moved across the river from the airfield to its current location.”

Altogether, the Vickers Vanguard represents a significant period in British aviation. Vickers-Armstrongs was a pioneering outfit in UK vehicle engineering, producing dozens of military and civilian aircraft variants. The company was divested as Vickers plc in 1977, and the brand became defunct in 2004, following the purchase by Rolls-Royce plc five years earlier.

What are your thoughts about the Vickers Vanguard? Did you ever spot the aircraft on your travels over the years? Let us know what you think of the plane and its operations in the comment section. 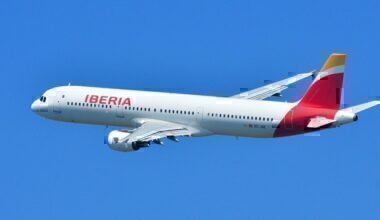 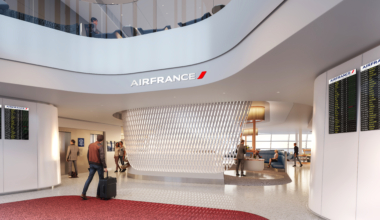 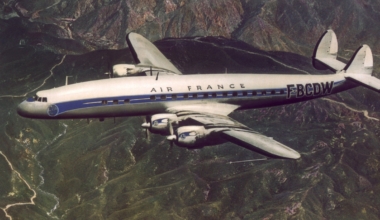