Remember that time Virgin flew a British-made turboprop between London and a small Dutch city? Neither did we, so when we spotted the Vickers Viscount in full Virgin livery, we had to find out more. Here’s the story of the short-lived Vickers feeder flights from Maastricht to Gatwick with Virgin Atlantic.

But that wasn’t always the case. Back in the early days, Virgin wanted to see if there was a market for connecting services to its London Gatwick home from continental Europe, feeding traffic to its long-haul routes out of the UK. To explore this possibility, it began flying to Maastricht from London with a rather unusual plane.

The Vickers Viscount was a British-made turboprop, the first commercial turboprop, designed to replace the Douglas DC-3. Its first flight took place in 1948, and it entered service in 1953 with British European Airways. Its big passenger windows and smooth ride made it a hit with airlines all over the world, with the 700 series selling 445 models.

The 700 was followed by the 800, a stretched version with a capacity of 57 – 65 seats. BEA was to be the lead customer for this type again, with a designation of the Vickers Viscount 802 made specifically for it. At its peak, BEA flew 77 of the type. But what was Virgin doing with this aircraft, and why Maastricht of all places?

Back when Virgin acquired the Vickers Viscount, low-cost carriers were not a thing. Virgin wanted to capture more market share for its transatlantic flights, and believed it could do so by sending a smaller aircraft to a key point in Europe to act as a feeder to its London home.

Maastricht is a relatively small city, in the south east of the Netherlands. It was chosen not due to a wealthy or particularly travel-hungry population, but for its strategic location in the north west of Europe. Within a radius of around 70 miles you’ve got the Belgian cities of Antwerp and Brussels, and to the east, a swathe of big German conurbations including Dusseldorf, Cologne and Bonn. 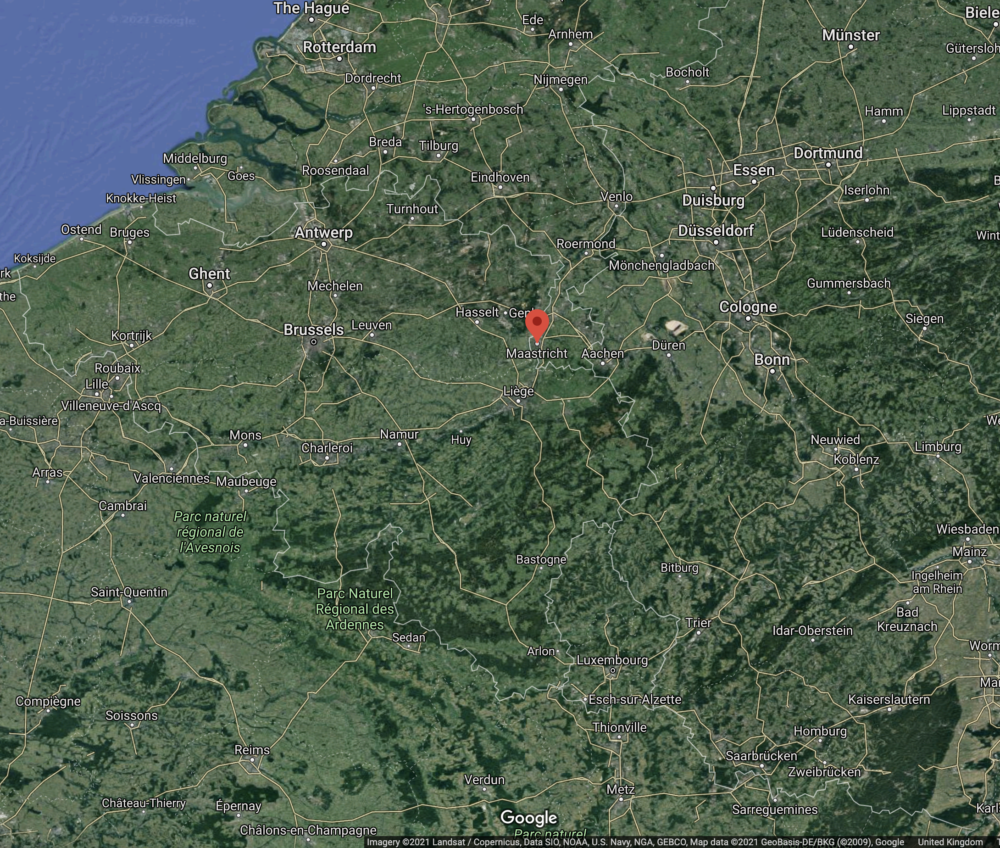 Its location in the Netherlands was also strategically important for another reason. This was pre-Open Skies in Europe, but there was an agreement in place between the UK, Ireland and the Netherlands to allow free and easy travel by air.

Virgin damp leased the Vickers from British Air Ferries, with BAF providing the plane and pilots but Virgin supplying the cabin crew. Four aircraft went through Virgin’s hands from BAF – G-AOYP, G-AOYG, G-AOHT and G-APEY. All were Viscount 802s first registered in the late 1950s to BEA.

While the flights to Maastricht were timed to connect easily with Virgin’s long haul services, that wasn’t the only reason they were popular. For the first time, Brits and Europeans had an easy, affordable way to fly, with fares offered between the UK and the Netherlands for a flat rate of £19.

Virgin had, unwittingly, pre-empted something that would become a revolution in the coming years. It had provided the first low-cost service in Europe, and could have pre-empted a step change in air travel well ahead of its time. Sadly, after around five years of on-and-off, underperforming services, Virgin quietly dropped the short-haul connection.

According to Simon Calder at the Independent, Branson once told him,

“There was concern that a low-cost, no-frills airline was detracting from the Virgin brand in the marketplace. We certainly missed an opportunity. It would have been fine for us to have both brands.”

It would indeed, and had Virgin really pushed ahead with developing a low-cost European network, things might look very different than they do today. But Virgin was moving into the big league with its long-haul services, and chose to focus on that. Since then, there have been various flirtations with short-haul feeder networks, but nothing has yet stuck.

Interestingly, G-APEY went on to be the very last Vickers Viscount to operate revenue service in the UK.

Did you ever fly the Virgin Vickers Viscount? Let us know in the comments.