Why Are Planes’ Landing Gear Tilted?

An aircraft on the ground appears to have a straight set of landing gear wheels, flat to the ground. If you look at it after takeoff or before landing, though, you will notice that it is often titled. Surprisingly, this it is more about practical storage and space savings rather than any technical landing aspects.

The main reason that the landing gear tilts is simply to allow it to fit best into its storage compartment in the fuselage. Space on an aircraft is precious. The wings and fuselage store fuel, and the more space is taken up by extras (such as landing gear), the less space there is for fuel, and hence the lower the aircraft range.

To maximize the use of space the wheels are titled to fit into a smaller housing. This works using a device known as an actuator located between the wheels of the landing gear. This is hydraulically operated and applies a force to position the wheels at the correct tilt for storage.

When landing, the actuator will initially attempt to keep the landing gear titled. As the force increases, the pressure is released, allowing the wheels to level. This all happens very quickly and is more complicated than it sounds. It is best to see it in action – take a look at this video produced by Captain Joe.

The actuator can only be powered into the extended direction, not in both directions. The reason for this is complexity. It would require a more complex, and hence larger, heavier, and more expensive hydraulic set up to do this. And if it is not necessary, then why do it?

A few other benefits

The primary function of the landing gear, of course, is to take the force of the landing aircraft and prevent any contact between the fuselage and ground. Although it is not the main purpose, the tilted landing gear does help with this. The torque produced by the straightening gear helps to smooth the landing and lower the nose gear.

Another benefit from the tilt is the ability to use the first contact of the wheels (detected from pressure and weight difference) for air/ground sensing. This operates differently across aircraft, but it can include activating the speed brakes and allowing reverse thrust and aircraft depressurization.

Given that the tilt is not primarily related to landing safety or technology, it is not surprising that landing gear are tilted differently on different aircraft. Some have leading wheels landing first, some the rear wheels, and some are, in fact, not tilted at all.

In Captain Joe’s video description, there is an interesting difference explained between the Boeing 777-200 and 777-300 variants. The 777-300 has an additional strut on the landing gear. This causes the wheels to lift off one pair at a time (rather than together). This gives a bit of extra height, lowering the risk of the tail striking the ground on takeoff.

Problems with the landing gear are a common cause of aircraft emergencies. Any issue preventing full retraction, extension, or locking of the gear in place will lead to an emergency landing.

Some incidents include a Virgin Atlantic A330 with a landing gear that failed to retract after takeoff from London Heathrow in March 2020. And earlier in 2020, a Virgin Australia Boeing 777 landing in Los Angeles suffered hydraulic issues with its main gear.

We don’t often write about landing gear technology. Let us know your thoughts on their function and tilting, or any model specifics, in the comments. 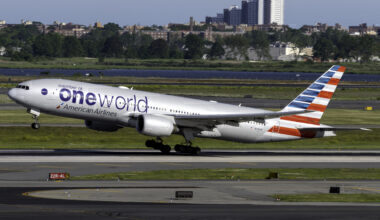 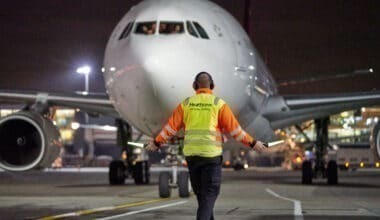