Why Cargo Is Key To Resuming Passenger Flights

The International Air Transport Association (IATA) today revealed the air traffic statistics to the end of September. While passenger traffic was, as expected, significantly down, cargo traffic has recovered to just 8% below the capacity of last September. The lucrative cargo market is going to be a key source of revenue for passenger airlines going forward, allowing them to operate profitably even when the passenger cabin is barely filled.

Cargo traffic is just 8% down year on year

Today, the International Air Transport Association (IATA) published its global air traffic figures for September. As expected, passenger traffic remains well down year on year, overall hovering at just less than 73% down. Conversely, the cargo market has seen a strong recovery and, in terms of cargo miles flown, is down just 8% year on year. 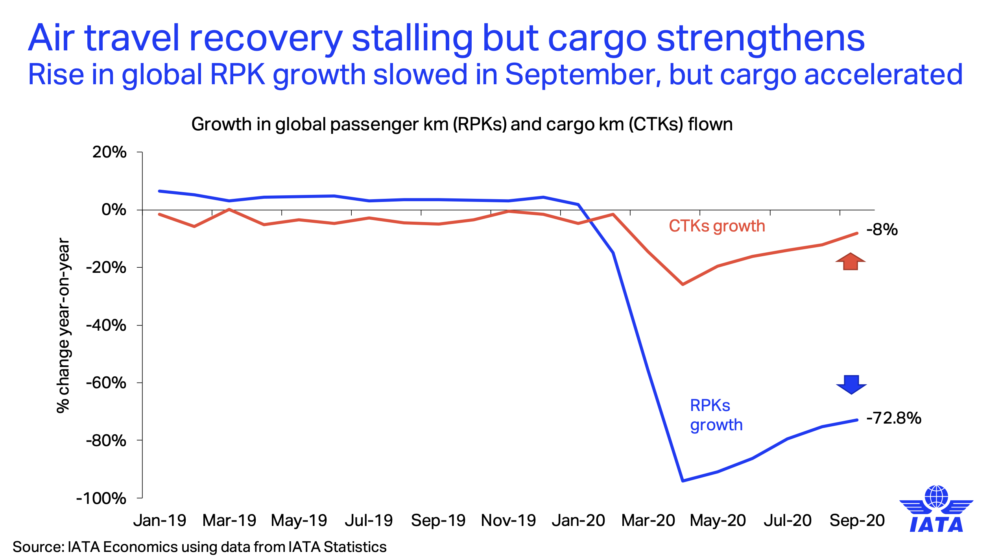 This is not something which has escaped the notice of passenger airlines. Throughout the pandemic, we’ve watched as increasing numbers of passenger carriers have turned to cargo operations to secure some revenue input. This has been a combination of utilizing belly hold capacity, along with cargo on seats and sometimes preighter conversions.

While the lack of cargo being transported in the belly hold of passenger planes is an issue, capacity has increased over the months since lockdown. Nevertheless, it still lags behind the demand, meaning freighters are very, very busy. IATA’s chief economist Brian Pearce commented,

“Freighters are extremely busy. Freighter capacity is up by 20%, the average hours flown are almost 11 hours, which is exceptional …. Although traffic volumes are down just 8%, the amount of available capacity is down 25%. Obviously load factors are very high 57% percentage points from where they were last year.” 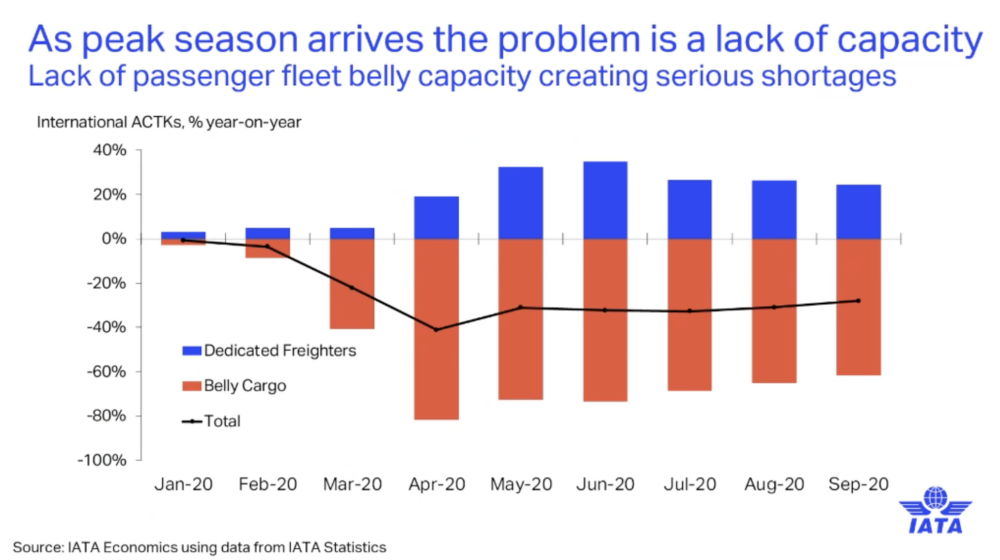 With the cargo market approaching what is traditionally its busiest period of the year, there is still a capacity crunch. The portion of the market that usually relies on being transported in the belly hold of passenger planes simply has nowhere to go, presenting a challenge to distributors this winter.

An opportunity for airlines

We’ve seen a number of airlines entering the cargo market for the first time, however for many this is part and parcel of their bread and butter income. Usually the economics of a flight, particularly with a widebody aircraft, requires a good load factor both in the passenger cabin and in the belly in order to make it a profitable operation. Right now, all that has changed.

The lack of capacity in the cargo market has sent yields skywards. Cargo is worth more to airlines than it ever has been before, meaning its becoming feasible to operate routes even if the passenger demand is constrained. Earlier in the year, Esayas Woldemariam, Acting CCO of Ethiopian, told us,

“The flights may not be with dense passenger load factors, but much rather the payload capacity being put to good use for conveyance of cargo and whatever number of passengers we have above the wing. The combined economics are still palatable for us to continue densifying our hub and spoke network.”

Ethiopian has been flying to many of its 129 pre-COVID destinations, even while borders have been closed. Its strategy to maximize revenue from cargo has allowed it to maintain its network, operating profitably even when there were barely any passengers on board.

This is a key opportunity for airlines, and will be instrumental in the resumption of passenger flights. Pearce commented,

“As networks start up and routes start up, cargo is a really important driver of the viability, at least in operating cash terms, for those services.”

Flying cargo at this lucrative time in the belly holds of passenger planes can go a long way towards making a route feasible, even with a low load factor. As we start to see airlines coming out of the crisis, having a full belly is likely to be seen as equally if not more important than having a full passenger cabin. And with cargo capacity still crunched for the holiday season, the world is going to need those bellies to be filled too.