Wizz Air Abu Dhabi is finally ready to take flight, with its inaugural service scheduled to fly to Athens on Friday. In celebration of its launch, the airline has released 2,021 tickets priced at just one UAE Dirham – that’s around $0.27. For six hours of flying time, that’s a very attractive offer!

Ultra-low-cost flights to celebrate the launch

Eastern European headquartered Wizz Air is well known for offering some very competitive fares. Flights around Europe can often be snagged for under $30, with even lower prices offered to members of its Discount Club.

With this in mind, we expected to see some cracking fares on offer once its new airline, Wizz Air Abu Dhabi, began to fly. But we didn’t expect them to be quite this good. To celebrate the launch of the airline and to help stimulate demand from Abu Dhabi, Wizz is selling seats for just one UAE Dirham; that’s about $0.27. 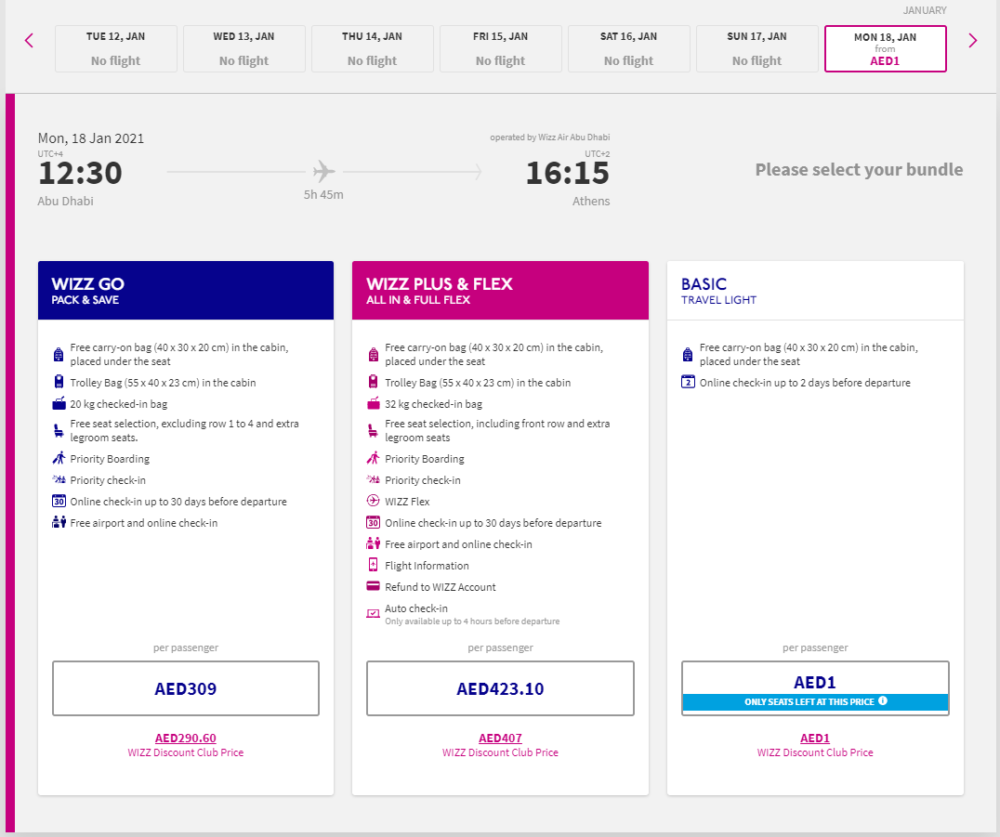 And they aren’t short flights either. Wizz is offering these fares on flights from Athens and Thessaloniki to Abu Dhabi, and also on the return segment too. These flights are scheduled at around six hours in duration, so that’s six hours in the sky for less than the cost of a packet of chips.

But the fares won’t be around for long. This ultra-low fare is available on just 2,021 tickets and on select flights only. They do include every single seat on Wizz Air Abu Dhabi’s inaugural flight, which will take place on January 15th on the Athens route. They went on sale yesterday, so be quick if you plan to take advantage.

“As the UAE’s new national airline offering a new type of air travel, we are welcoming the New Year in style. As an ultra-low fare airline, we want to provide travellers with the opportunity to visit exciting destinations for super accessible prices. We expect these tickets to sell out fast.”

Wizz Air Abu Dhabi, a joint venture between Wizz Air and Abu Dhabi Developmental Holding Company PJSC (ADQ), has been hotly anticipated but had pushed back its launch date several times due to the difficulties of operating during the pandemic. With the vaccine rapidly rolling out around the world, it seems Wizz Air Abu Dhabi is finally ready to take flight.

Some of you might already recognize the background, and yes, this is the WIZZ crew in Abu Dhabi for the first time. No, not on vacation, because from now on WIZZ is a UAE national airline. Start packing and check out our next departure! 👉 https://t.co/AeMNWOslh5 pic.twitter.com/1EJkoAqRUG

The airline will launch this week with the Athens flight and will be adding more destinations as the year goes on. As well as Athens and Thessaloniki, it plans to fly to Alexandria, Kutaisi, Larnaca, Odesa and Yerevan, with more destinations being added over the coming months.

Its Air Operator’s Certificate (AOC) was secured in October, and crew have been recruited and trained. At the beginning of the new year, the airline added another two aircraft to its Abu Dhabi fleet, taking the total now to four. However, the CEO of Wizz Air, Jozsef Varadi, has previously said that he envisages the airline ramping up to a fleet of 100 aircraft over the next 15 years.

Did you manage to secure one of these super cheap fares? Let us know in the comments.