WOW air is rising from the ashes once again, but this time with a firm plan in place for its relaunch. At a press conference held this morning in Iceland, broadcast by Visir.is, details of a potential replacement have been revealed. Calling itself PLAY, the new Icelandic airline has some big ambitions and some solid goals.

Already the airline has chosen the A321 as its launch aircraft of choice. According to its new CEO Arnar Már Magnusson, this is a good fit for its initial destinations with good fuel efficiency. The airline is targeting both passenger and freight operations and will carry some 200 passengers per flight.

As with the old WOW air, the airline is talking about flying both east and west of Iceland, to the US and to Europe. However, the initial operations will focus on Europe with just a couple of A320s, with a view to growing the fleet to six by spring. Once it reaches that magic number, it says it will be investigating US routes with a view to being operational in time for the summer.

Although there is great work already being done, the CEO says that there are still many things left to do. The airline, he says, does not yet have it’s AOC, but is well on the way to getting one. The airline is yet to reveal a firm launch date but says it plans to start flying within Europe before the end of this year. By spring 2020, it expects to have six A320 family aircraft and to begin services to the USA.

A brand reminiscent of WOW

While the airline has chosen red as its main livery color, it harks back to the boldness of the old WOW brand. The lettering too of the chosen name PLAY is somewhat characteristic of the former LCC.

With positivity in mind, the airline is planning to start selling tickets later this month. As part of a launch celebration, it will be giving away 1,000 tickets for free, although it’s not entirely clear how this will work just yet. 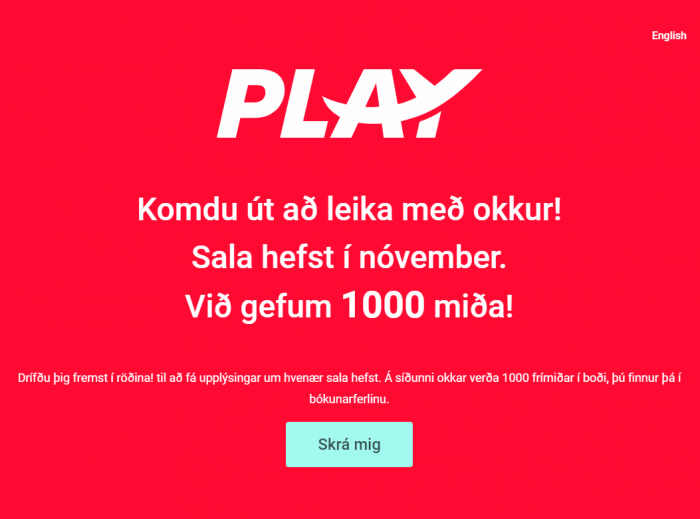 The airline is set to announce its first destinations within the next few days. It recommends interested passengers register on the mailing list at flyplay.com for announcements for routes and sales. Prices, it says, will vary by dates and destinations but, “PLAY will provide strong competition in the Icelandic market and strive to offer the best prices at any given time.”

The new airline’s website says that “the sky is our playground”, and describes its mission as,

Headed up by Arnar Már Magnusson as CEO, a previous employee of WOW air, PLAY says that the management team is made up of experienced aviation professionals. Included in the team are Þóroddur Ari who is co-owner and Sveinn Ingi who will be CFO.

Revealed at the press conference, the new airline has already received some $40m from an investment fund owned by Aislinn Whitley-Ryan, a descendant of the founder of Ryanair.